The Largest Networking Community For Veterans

Over the past week or so, many parts of the UK have enjoyed snow-filled scenes that wouldn’t look out of place on a Christmas card. We’re using the term “enjoyed” cautiously; good for children and YouTube videos of cats, less good for anyone wishing to carry on normal business, and – worse still – fatal for a number of homeless people, including veterans.

The pattern of the weather was predicted, as could be the reaction to it. Cold fronts from Siberia, going in the opposite direction to our normal warming front from the jet stream swept in, bringing extreme and sustained cold temperatures. Any normal rainfall fell as snow.

On the homefront, things were also predictable; Waitrose ran out of organic milk, bread sold out, useful things – such as tinned food – remained unsold and there were panicked rumours of the Home Counties being without hummus and Pellegrino for a significant period. But life carried on. While some bunkered with their ripening avocados, refusing to budge all the while snow was on the ground, a notable group of people continued driving when perhaps they shouldn’t. Consequently, the emergency services were repeatedly called to assist people in luxury 4x4s, who found that, after all, a sixty grand Range Rover doesn’t work particularly well in snow drifts.

Those with less access to the media – both literally and figuratively – found themselves stranded without aid. Cumbrian communities were cut off to the extent that an airlift was required to get essential stocks into villages running low on food, water and fuel. 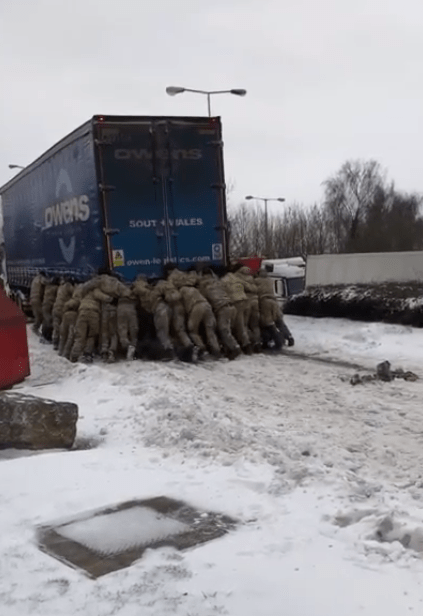 The relief effort got underway and the periodically aired pictures of a Chinook dropping supplies off to houses where you might take a UK short break were as predictable as the photos of shiny, happy 18 year old girls jumping for joy at their A Level results on the front of the Daily Telegraph.

But behind the news-friendly images are some harsh truths. The Army, Marines, RAF and Navy provided the back up where nobody else could in a manner that has gone on for as long as anyone can remember. They did this despite vicious cuts to numbers that see the smallest standing army in this country since the Napoleonic Wars. Senior NCOs have been quietly ousted, with the wealth of experience that they hold, to cut costs. Recruits are sought to bring numbers back up, through a costly and – many feel – misguided recruitment campaign.

What we see, with sad predictability, is that in these moments of snow-blanketed countryside, the Forces are not just fair-weather friends. But, like the transport system, it is largely one-way traffic. Just as we find dealings with government are, for veterans.

It seems that to be considered a player in international... END_OF_DOCUMENT_TOKEN_TO_BE_REPLACED